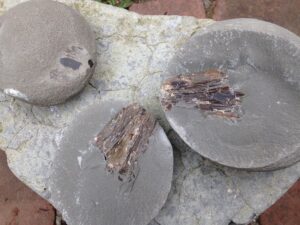 On the 26th April 2020 at 6:15pm on @BBCOne, museum geologist Paddy Howe and his wife Rikey were on @BBCCountryfile talking about fossil squid ink, and using it to paint.

Fossil squid, of various types, are fairly common finds on some parts of the Jurassic Coast. #Dorset

Sometimes when they are found, portions of the animal’s ink sac are preserved with ink still inside. Fossil collectors realised years ago that you can scrape out some of the ink & grind it into a powder. By adding water, the resulting ink can be used to write, paint or draw.

In the first post in this thread, the first picture shows two limestone nodules containing teuthids, a type of fossil squid. One has been split open to show the squid inside.

Pic 2 shows a piece of stone containing an ink sac. The very black area is the sac itself, and the lighter part with a line across even has impressions of some of the squid’s muscles on it! The dark stain in the rest of the stone is ink which had leaked out from the ink sac.

Some of the ink from the stone in the third picture was used by Sir David Attenborough and author @Tracy_Chevalier to sign books for museum geologist Paddy Howe, and museum education officer Chris Andrew. 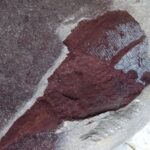