Mary’s home stood on the sea wall, it’s back facing the sea with its front windows looking out onto a small square. Her father, a cabinet maker, took Mary and her brother fossil hunting from a young age. They first sold fossils from his workshop and a table set up in the square. The fossils were called curiosities, devil’s toe nails, verterberries, thunderbolts and snakestones, but little was understood about their age or significance.

Following her father’s death in 1810, Mary’s family faced debt and severe financial difficulty. Legend suggests, that following a chance find and profitable sale on the beach on the day of her father’s funeral, Mary was inspired to continue fossil hunting. In 1811, when she was just 12 years old, she and her brother discovered and excavated the first ever complete specimen of an Ichthyosaur found between East cliffs and Black Venn, just outside Lyme Regis. The sale of this fossil was equivalent to 6 months’ salary for her dead father and significantly helped pull the family out of debt.

Mary went on to make many more finds, including the first complete plesiosaur, Hybodus – a new species of shark and the first pterosaur found outside Germany. Her discoveries were ground breaking and helped inform new ideas about geology, the age of the Earth and evolution.

Mary’s ability to find, accurately record and prepare fossils was remarkable. During her lifetime her fame grew, her skills were sought after and her fossils were often bought by museums and collectors. But unfortunately her expertise was barely acknowledged by the academic institutions, scientific communities and individuals who benefitted at the time.

Lyme Regis Museum tells the story of Mary Anning, her extraordinary life and discoveries. It stands on the site of her former home and first fossil shop. 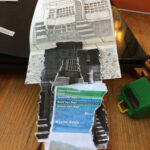