The idea for the Christmas gift came from Princess Mary, the 17-year-old daughter of King George V and Queen Mary, she wanted to make a gift to ‘every sailor afloat and every soldier at the front’.

Originally she planned to pay, out of her private allowance, for a personal gift to each soldier and sailor, but this was deemed impracticable and a proposal was made that she lend her name to a public fund, which would raise the necessary monies to provide the gift.

In a letter she wrote:

“I want you now to help me to send a Christmas present from the whole of the nation to every sailor afloat and every soldier at the front. I am sure that we should all be happier to feel that we had helped to send our little token of love and sympathy on Christmas morning, something that would be useful and of permanent value, and the making of which may be the means of providing employment in trades adversely affected by the war. Could there be anything more likely to hearten them in their struggle than a present received straight from home on Christmas Day?

The scheme was a great success and the total amount raised exceeded expectations and amounted to £162,591 12s 5d, most of this coming from thousands of small gifts sent by ordinary people from all parts of the United Kingdom. In fact, more money was raised than was needed, even after the eligibility for the gift had been extended.

The tin itself is made from embossed brass and was approximately 13cm long by 8cm wide by 3cm deep with a hinged lid. The surface of the lid is decorated with a portrait of Princess Mary, surrounded by a laurel wreath and with an ‘M’ either side.

At the top are the words ‘Imperium Britannicum’ with a sword and scabbard either side, and at the bottom are the words ‘Christmas 1914’, flanked by the bows of battleships forging through a heavy sea. In the corners are the names of the Allies: Belgium, Japan, Montenegro and Servia, with France and Russia either side.

Inside the tins were a variety of gifts according to which group of people they were being sent to – usually cigarettes and rolling tobacco, chocolate for nurses, sugar candy and writing paper for non-smokers. The embossed brass box was air-tight, and made a useful container for money, tobacco, papers and photographs, so was often carried through subsequent service.

The boxes became treasured possessions and continued to be used long after the war. 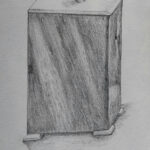 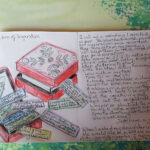